How Do I Know I Am Not Just Being Selfish? Part of my job responsibilities this year is to help incorporate more technology into the classroom teachers' teaching. Already this year I have facilitated a Skype conversation between a class in my building and one in another state. I have helped several teachers begin (and begin to use) their own class blogs. I have created a professional development site that will be used in conjunction with our faculty book study. Things seem to be rolling along.

Why is it I find myself more excited about the prospect of doing collaborative work with other schools than my students? Are they simply more accepting of the changes we are experiencing in the world and therefor not as impressed?

What do you think? Are we pushing too hard a technology agenda, or are we simply trying to catch up with the world outside our walls?
Posted by Wm Chamberlain at 1:57 PM No comments:

Last Tuesday I facilitated a Skype conference call between Mrs. Baker's ESOL class and Mrs. Whittier's Spanish class. Unfortunately, I had duty in the morning and had limited time to set up the equipment.

I used a logitech usb webcam for the video feed feed and a Blue Snowball usb microphone for audio. The laptop is a Dell Vostro 1500 with 2 gigabytes of ram. We used the screen on the laptop for the video. We also used the built in speakers on the laptop for sound.We were using our wireless access for the internet. I wanted Mrs. Baker's students to be in their room so Mrs. Whittier's class could see the class environment.

There are several things I plan to change for the next Skype call. The first is making sure I have powered audio. We had a difficult time hearing Mrs. Whittier's students through the excited chatting. The second would be to run the video through a projector. Although the video stream isn't exactly great, it would still make it easier for the students to watch. I would also change from our webcam to my digital camcorder with my macbook. Our video stream would improve greatly that way.

To record the Skype call next time I will use CamStudio (Thanks to the recommendation by Eric Langhorst!). I had planned on using Jing Pro, but realized too late that it would only record 5 minutes of video. Obviously, this meant I did not get any screen capture video of our meeting :<.

If you are planning on doing a conference call, here are some things to think about. Make sure you have an alternate (non internet) means of contacting the people you are skyping. I would suggest a phone number. See this post for how I learned that lesson. Also, do a practice call so the bugs can be worked out. I was having problems with my Snowball microphone on our practice call and had time to find a solution before the actual call. 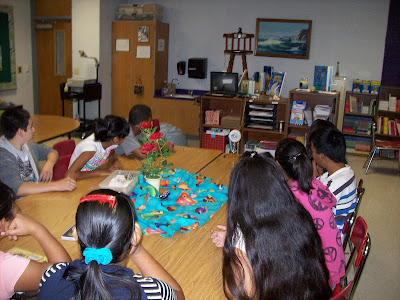 Here is the view the students had of the call. 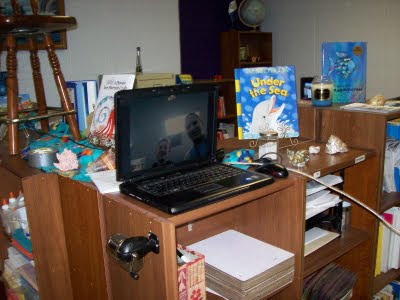 Here you can see Mrs. Whittier on the screen. 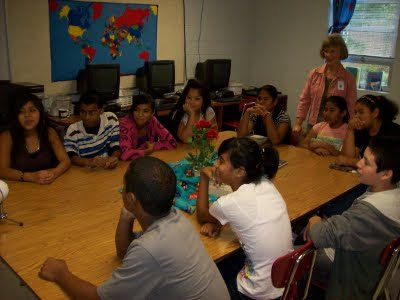 Notice how the students were focused on the other class. 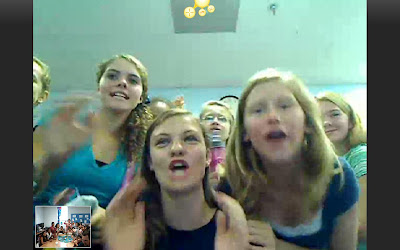 Here is a screen capture of Mrs. Whittier's class waving goodbye at the end of the call. You can see our video feed in the bottom right corner.

Here is some video. Plese forgive the poor quality.
I was very pleased with content of the meeting. Mrs. Whittier's class wanted to learn about schools in Mexico. We have several students that have attended schools in Mexico so they were very valuable resources. Mrs. Whittier also wanted her students to have authentic experiences with the Spanish language. They had the opportunity through the call to talk to native Spanish speakers.

In return, Mrs. Baker's students had the opportunity to learn about school in Virginia. The school Mrs. Whittier teaches at the Fredericksburg Academy is a private school that is very different from our school. Our students learned about some of those differences, but also learned that both groups of students had many similarities.

Overall, I thought the meeting went extremely well and we plan to continue the conversation later in the year. If you would like your class to skype with one of our 3-8 classes, feel free to contact me and we will set it up!
Posted by Wm Chamberlain at 11:02 AM No comments:

Today was supposed to be a big day. The true beginning of my part time technology facilitation job. Today I was supposed to have a class from another state skype in to learn from students in our ESOL program. Mrs. Baker, the ESOL teacher, and I were really excited and ready for the experience. Her students had practiced speaking in front of an audience to prepare. Everything was ready to go, and then...... 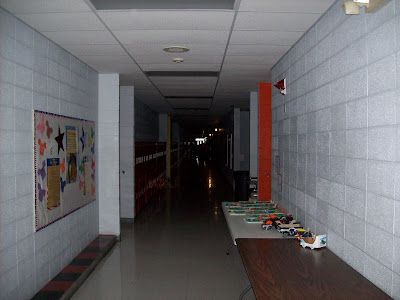 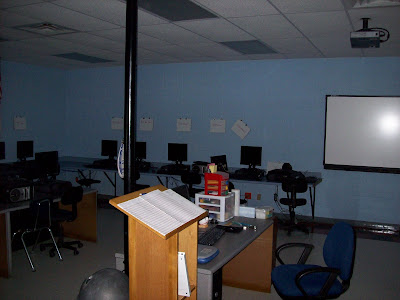 The electricity flickers once, twice, and then goes down for the eight count. Not a problem, there was still 50 minutes until the appointed time. I was sure it would be fixed pretty quickly. It is unusual for our power outages to be more than 5 or 10 minutes.

After 20 I start to think, "Mrs. Whittier doesn't know we have no electricity and I can't tweet or skype....." I try to call my wife but get the voicemail. Irritated I hang up and immediately get a message that that I have a voice message. Yup, I had called my own phone.... I called home again and found out electricity was out there too. No help there.

I go to my office to think. Walking in the dooor I have another idea, a friend and former colleague is now principal at another school in the district. I can have him log into my skype account and send a message. I quickly find the school's number and call but he is not in the office and they can't contact him.

Suddenly I realized I had the solution in my pocket....I can send a direct message from my cell phone using texting! 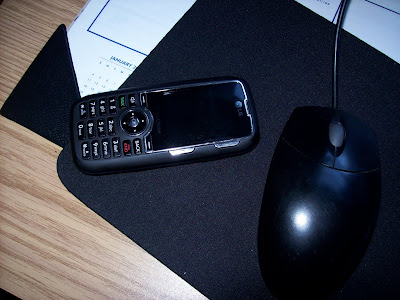 But Mouse, you are not alone, In proving foresight may be vain:

Robert Burn's To a Mouse

I immediately text D: @capohanka my schoolhas no electricity can't do skype today dm me back if u get this please

I follow that with D: @vwhittier we have no electricity at school and won't be able to skype in please dm me if u get this i will get it on my cell

I received these messages back on my phone. Thank goodness I have my dm's set to text me!

I was feeling pretty good about myself, I had solved the problem and could finally quit worrying about letting Mrs. Whittier know we wouldn't be able to skype in. Then I get this:

The purpose of my story is to point out that thinks don't always work out as we plan them. Had I not realized I could contact Mrs. Whittier she would have had her class ready to go and would not be able to explain why the call wasn't happening. I know that she would have been put in an awkward position through no fault of her own. In the future, I will make sure to get a phone number that I can call in case something comes up unexpectedly so that I won't leave anyone in that position.

By the way, our electricity came back up about 7 minutes before the call was scheduled. This might have been enough time to actually get things set up and make the call, but when we started up the server it wouldn't load properly due to an IP problem, but that is another story....

Posted by Wm Chamberlain at 11:45 AM No comments:

Kevin Huneycutt "I Need My Teachers to Learn"

I found this video on Wesley Fryer's blog Moving at the Speed of Creativity. I think this is an excellent example of how to create content that is powerful and meaningful. Watch the video below and listen to the message. Do you think this video might change the way someone you know thinks of using tech in the classroom?

Posted by Wm Chamberlain at 9:18 AM No comments: