I have been thinking about my prejudices lately. I can honestly say that I have changed a lot in my 40 years on the planet. When I was in my teens I used a lot of profane language (to the chagrin of my teacher grandmother.) I decided at the ripe age of 18 that it had become too big of a part of my vocabulary and stopped. (It is amazing how well operant conditioning can work!) After 20 years and 4 children I find it offensive.

This is why I have a problem. Every night on television there are shows on almost every  channel that show very violent acts. It isn't unusual to watch a police show where several people are murdered and assaults are commonplace. We don't allow potty words on broadcast tv, but shooting people is just fine!

I have decided that the reason violence is allowed is because we are an empire building nation. We want to expand across the globe. Manifest Destiny on a global scale. To get citizens to be soldiers we have to make them immune to the psychological problems violence causes. That is why we encourage our citizens to watch violence on television. I gets them ready...

As an educator I have to ask myself the question, "Which is more damaging to my students: violence, bad language, or nudity?" I can honestly say I would prefer my children to be called names or exposed to a naked body than to be assaulted or killed. I would assume you believe as I do. Why then do we allow/encourage our students/children to watch violent content? Give me four letter word or some nudity over that any  day.
Posted by Wm Chamberlain at 11:02 AM No comments: 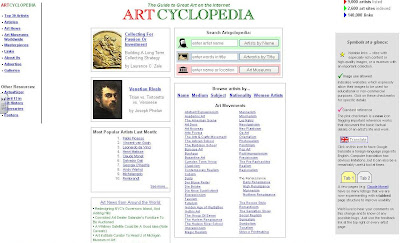 I have been showing art teachers Artcyclopedia for years. It is a fine art search engine that allows you to search by the name of the artist, name of the art work, or even the name of a museum. It also has a list of clickable art movements that you can look at and get a quick overview.

For example, if you do an art search for the painting Sunday Afternoon on the Island of La Grande Jatte by Georges Seurat it will take you to a page that links you to four sites about the painting. (One of the links no longer works though so make sure you check before you assign students to them.)

If you click on browse artist by movement you will see a list of the artists in that movement that are also linked to a search page about the artist.

While your first stop may be to Wikipedia to get your information for a painting or artist, you may want to give Artcyclopedia.com a try if you are interested in browsing or want to get a larger picture of art.
Posted by Wm Chamberlain at 1:29 PM No comments: