What Teaching Has Taught Me About My Faith

There are plenty of posts by teachers that talk about how they share/don't share their faith in the classroom. For this post I want to talk about how being in a classroom has taught me more about my faith.

I am quite honest about my problem with a real lack of empathy. I have always struggled with the idea that I could somehow be emotionally effected because of someone else's emotional condition. I do have sympathy, although I don't think it is particularly well developed. I can identify with someone's grief if I have lived through a similar situation. The reality is that unless I can personalize it, I can't really feel it.

I believe the purpose of Christianity is to love one another. Love is a difficult emotion to explain (not that love is only an emotion.) I am pretty sure that empathy is required for love though. I do love, and have loved but it always comes through an emotional bond. Therefor, if I can't empathize or sympathize with someone, I probably don't/can't(?) love them

In the classroom we try to get to know our students as quickly as possible. This usually means getting to know their name, important people in their circle, pets, interests and stuff like that. For many this creates a temporary emotional bond, from which they can get can develop a fondness for students if not love. This, you can imagine, doesn't work so well for me.

I believe that I have been called to be a teacher. I have a peace about being in the classroom I never felt in another position. I used to think that I was placed in the classroom to be a good model for students, specifically a positive male role model for those who don't have one at home. But now I know I was wrong.

Teaching is Like Riding a Bike: Part 2 of at Least a 2 Part Series on Using Metaphors Because #Education 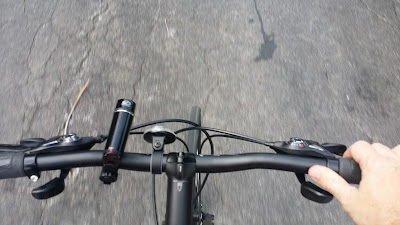 I went out for a bike ride today. I was inspired by my RunVoxRun group (who runs while I bike because I am almost always that guy) and an article I read in Bicycle Magazine both of whom reminded me of the joy of riding, not just doing it for pre-defined purpose. As I was finishing my ride I realized that several of the things I experienced on the road compared to things I experience as a teacher.

I decided to ride out through a scenic but rather dangerous stretch of highway. As I pedaled along at about 10 miles per hour, don't judge me, I was passed by a steady stream of traffic headed the same direction. We were all headed the same way, just at different speeds. At some point, if we don't have an accident, we would all arrive at the same destination.

Imagine your slower students who are pedaling at the safest speed they can muster being passed by their classmates. There has to be a point when they realize they are not like most of the others, they learn/read/process more slowly than average. That has to be a difficult and potentially scary realization. What are you doing as their teacher to reassure them they will arrive at the same place the others are headed to, just not at the same time?

As I pedaled along I noticed cars at the park and could see people playing soccer so I decided to wander down and check it out. When I arrived I noticed the two teams were made up of Somali and Hispanic players. For the ten minutes I watched they ran up and down the field, kicking the ball and yelling at each other. I am not sure how much they understood from each other, but I didn't catch any of it. The game didn't need a common language to be played successfully.

In your classroom you have several groups of students, and regardless of the language they know, speak a very different language than others. The kids that can't sit still, the ones that have problems at home, those who are way too caught up in their boyfriend/girlfriend than they should be. They aren't really communicating with each other using the same language, but they still create a community where they want to find success, and hopefully help the others in the community find success too. How are you helping those students who 'speak a different language' find commonality they can share so they too care about each other's success?

Just down the road from my home lives an old friend. He owns a cattle farm and as most cattle farmers do, he has several dogs. (He claims the small, annoying ones are his wife's.) Every time I ride my bike by his house the chihuahuas try to chase me. They have a pretty quick burst of speed but with their overly large heads (with funny eyes sticking out sideways) and little legs they cannot keep up with my super pedal power (averaging 10 miles per hour!) Soon they fall away and all I hear is their yippy barks in the background.

There are educators who IRL or through SM will lie in wait until you happen to cross the path of their particular pet peeve and as soon as you do they pounce. They yip and snarl and bite at your heels. They will try to make you turn your course or completely give up the journey all together. They don't thrive on the joys of the long ride, they instead revel in the time trial of blame and finger-pointing. Just remember, they can't keep up because of their overly large head, bug eyes and extremely short legs. Who do you have to turn to when waylaid by the chasing chihuahuas? Who will help you pedal past their lairs?

The End of the Ride

Ok, this is kind of a poor title because we know the ride never ends. We just keep pedaling. We have goals for ourselves and our students and we are constantly moving toward them. Sometimes we ride in groups, sometimes alone. Just remember, the end goal is less important than the stops on the way. 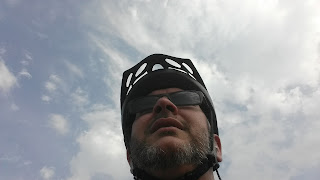 Tonight I used a metaphor comparing Twitter to a street corner. At some point the nice, safe and fun place to hang out started to become a more dangerous place. At first it was fun, after all who doesn't like the idea of a little danger?

At some point the fun, slightly dangerous corner was overtaken by hooligans. The corner is much more dangerous, threats are shouted at passers by. Graffiti started to appear all over. It went from a little fun and slightly dangerous to a place you don't want to be in alone.

Plenty of people still drive by the corner without noticing any difference. Others who tend to be more observant become a little less comfortable at the stoplight. Soon they find other routes to travel. Eventually even the least observant will notice, but by then the road will be as empty as the sidewalks.

So, the question is are you going to allow the street corner to be a place where hooligans feel comfortable? Are you going to help clean the graffiti or just ignore it as you drive by oblivious of the changes happening? Are you going to leave? Can it even be saved at this point?

I have a love/hate relationship with quotes in pics. They can be a lot of fun and also send a pretty pointed message. I use imrflip.com which allows me to use my own pics.

The strange thing is my Twitter feed seems to be inundated with the pics. They draw my attention (which can be good or bad), but they rarely lead to conversations. Basically, they act like billboards which is a one-way communication tool. That hardly meets the social aspect of social media.

I guess I would argue that we should use them sparingly, and hopefully as part of a conversation we are having. One tweet stands are so empty. 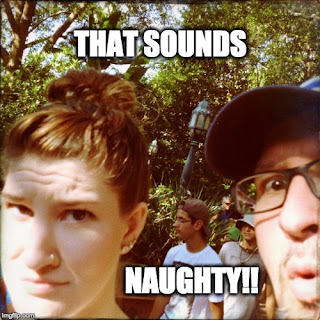 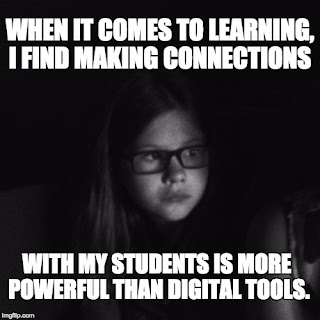 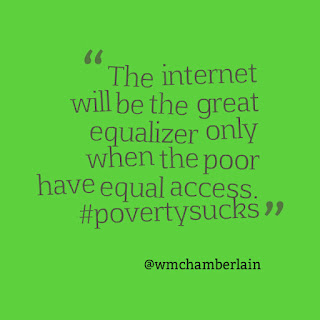 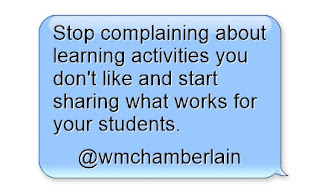 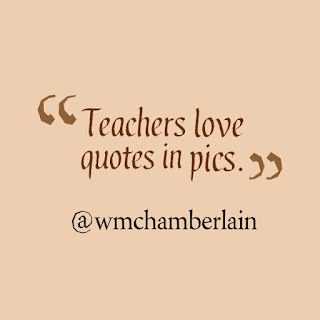 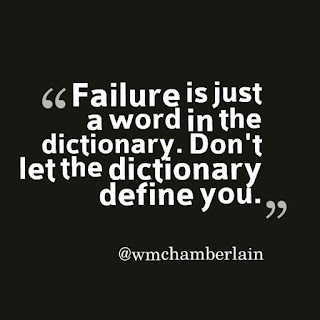 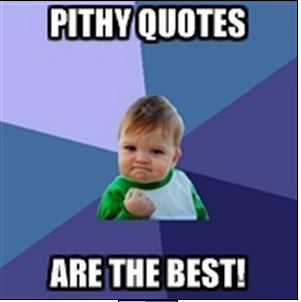 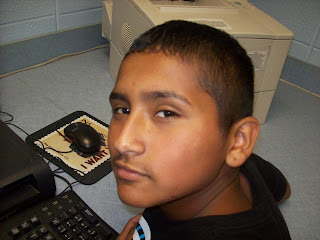 This is the fifth set of hard questions. You can search my blog for the others using the search box on the right toolbar.

1) Do you spend more time the week school starts worrying about how your room looks or how you will create a learning climate?

2) Are you using last year's lesson plans? If so, have you changed them to be more effective?

3) Have you already created your first month's lesson plans? How can they be effective when you haven't even met your students?

4) During open house, will you make small talk to the parents or have conversations about the educational experiences you are going to create for your students?

5) Are you intentionally, thoughtfully setting up your rules/policies to maximize student learning or to make you day go by more smoothly?

6) Have you offered to lead a professional book chat or other informal professional learning opportunities for the teachers in your building or will you wait and see if anyone else picks up the slack?

Comments are always appreciated.
Posted by Wm Chamberlain at 10:19 AM 1 comment:

I Sing the Principal Electric

I sing the principal electric,
The classes of those he loves engirth him and he engirths them,
They will not let him off till he goes with them, responds to them,
And discorrupt them, and charge them full with the charge of the soul.
adapted from Walt Whitman's I Sing the Body Electric

In the school, there is no more important person than the principal. He or she is charged
with making sure every child is safe, loved and has the best possible chance for learning. No
one has a bigger influence on the students, teachers and support staff. Please take some time
this year to show your appreciation for your principal.
Posted by Wm Chamberlain at 9:48 AM No comments:

Email ThisBlogThis!Share to TwitterShare to FacebookShare to Pinterest
Labels: inspirational

So here is a little hack that I do in my classroom and hallway. One year I moved into a retiring teacher's room and she left me with an inordinate amount of bulldog clips. After thinking about what to do with them I came up with an idea, hot glue them to the wall. 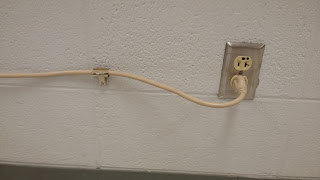 In the above picture, you can see I use the bulldog clip to keep the electric chord from lying on the floor. If you run a series of them six to eight inches above the floor they are much less likely to get accidentally knocked off by students shoes. 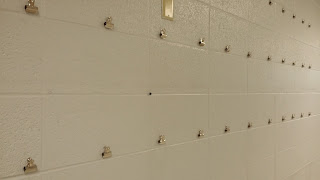 In this picture, you can see the hallway wall outside of my classroom. Soon the clips will be holding student work. The clips will allow me to much more easily move work around or replace older work with new throughout the year. This is much better than taping or gluing the work directly.

Very rarely do the clips take paint with them when they are removed. In fact, I have had much more trouble removing things that have been directly hot glued to the walls than the bulldog clips.
Posted by Wm Chamberlain at 3:12 PM No comments: