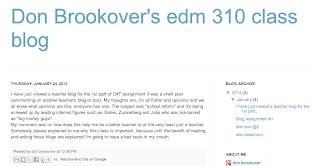 I was doing a quick check of my Twitter feed when I saw a comment from @JonBecker  that led me to this post by Will Richardson.  The conversation revolved around the comment by Don Brookover, a student at the University of South Alabama. Go ahead and read the post and the comment.

The conversation around the comment was at first of irritation (anger?), but it eventually evolved to addressing this issue. I found Mr. Brookover's blog and suggested that instead of talking about it on Twitter it might be better if it happened on the post.

This could have gone badly. I see too often people react very poorly to thoughts they disagree with online and their responses are worse than the original post. Let's face it, there is a lot of frustration and anger in the education technology field driven by our perceptions of the direction schools are headed. When confronted with a pre-service teacher that seems to flippantly discount what we are trying to do online, becoming angry is a very real possibility.

Fortunately, the network responded with respect and dignity. They responded to engage and educate, not to shame or hate.

As I thought about this throughout the day I could see a very real parallel between Mr. Brookover and students that I have. They have different experiences, different backgrounds, and they think differently than I do. Shame and hate won't help my students learn either. There are lots of lessons for us in this story.
Posted by Wm Chamberlain at 4:48 PM