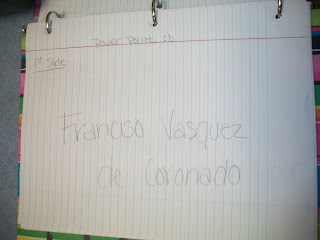 Lakin decided to create a paper model for her Explorers PowerPoint. She sketched the idea for each slide on paper so that she could organize it and tweak it before she created her presentation. Because she had already organized her pages and received the feedback she needed she managed to put her presentation together in just a few minutes. Instead of spending time on the computer making decisions about what information to include and how she should organize it, she focused on finding great pictures to emphasize her points (to the point of not even needing text on some slides!)

This was not a technique that Lakin was taught, she thought of it on her own (or maybe she had heard about it somewhere else but forgot.) Ours students can and will learn without us (sometimes despite us). I wonder if sometimes I am more of a roadblock than an expressway on their learning journey. Below Lakin explains what she did and what she learned.
Posted by Wm Chamberlain at 2:32 PM