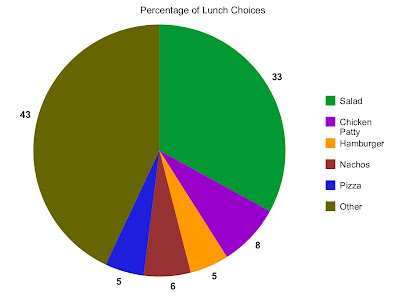 Friday the class came together and we looked at the work they were supposed to complete, finding the frequency of the second choice of meals. They found nineteen different choices over the thirty-three day period.

Next we identified the number of choices that had been used as a choice one and a choice two, of which there were four: hamburger/cheeseburger, nachos, tomato soup with grilled cheese, and grilled chicken.

We figured the percentage of time each choice was given throughout the period. Luckily we collected data for 33 straight days (not on purpose, but I will take all the luck I can get) and soon discovered we could multiply the number of times a choice was given times one percent. The largest percentage was with the salad which is the third choice daily.

The question I asked to the class was, "Is it significant that 33% of the choice opportunities is one food item?" They thought that it was, but I explained we wouldn't know for sure until we saw how often students chose a salad. We are going to have a lot of tough discussions about salads as a choice when they discover (as I have seen while glancing through the data) that it is going to be a pretty small percent of students that choose it.

I also spent some time surveying the class and asking out of the four most offered choices, which ones did the students like the most. Chicken Patty was the favorite with twelve of the twenty students picking it as their first choice.

After we did the informal polling we watched a couple videos on how samples are used statistically. Next we will be looking at identifying the percentage each was chosen daily. We should be able to identify the more popular food choices and also start to look at if the position of the food choices are important.
Posted by Wm Chamberlain at 10:32 AM